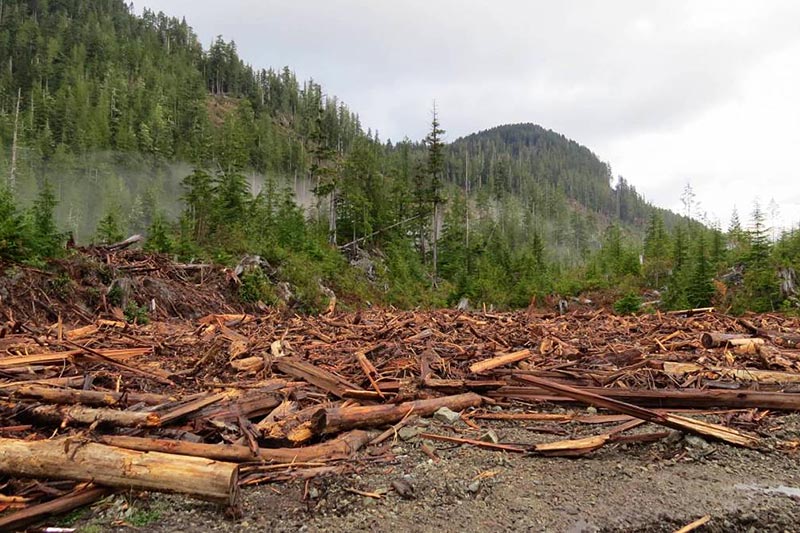 A new Sierra Club map of B.C.’s southern coastal rainforest shows why the Walbran rainforest on Vancouver Island matters, and what we stand to lose for species, carbon and beauty, if the proposed logging goes ahead.

A few weeks ago, the B.C. government issued the first of eight logging permits for the Walbran requested by logging company Teal Jones, despite a public outcry and opposition from many environmental groups.

In the last few days, activists have reported on social media about road crew and helicopter activity near cutblock 4424, indicating that Teal Jones could start logging any day.

To defend the issuing of the permit, the B.C. government has stated that a large portion of the Walbran remains protected in a park. This is correct. But to allow further logging of the remaining old-growth in this area is inexcusable considering that the Walbran is literally the last place on Southern Vancouver Island with old-growth rainforest of this type, size, and intactness.

The state of the awe-inspiring, “big tree” old-growth rainforest ecosystems on Vancouver Island reflects what author J. B. MacKinnon has described as our 10 percent world. Globally, there are now countless examples which show that we have reduced the original biological richness of our lands, oceans, ecosystems, plants and animals by about 90 percent.

The same happened to the biggest ancient trees in the rainforest valleys in the southern portion of the B.C. coast. About 90 percent of the most productive forests with the capacity to grow the largest trees have been logged and converted to young forests. Today, there remain very few old-growth areas that are big enough to support healthy populations of salmon and endangered species like the marbled murrelet. 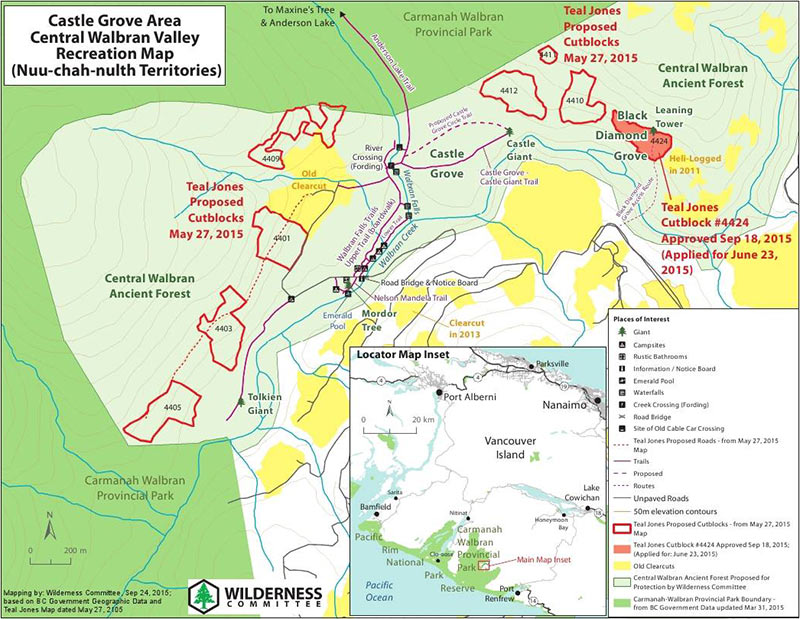 In fact, our analysis shows that the Walbran Valley is the most urgent opportunity to increase protection of contiguous, old-growth rainforest and habitat on Vancouver Island.

We examined 155 landscape units on Vancouver Island and B.C.’s south coast (landscape units are areas of land used for long-term planning of resource management and usually 50,000 to 100,000 hectares in size).

Our analysis focused on the remaining percentage of good and medium productivity old-growth forest, i.e. types of forests that are characterized by towering trees and high bio mass and carbon storage per hectare. Of these types of forest, combined, less than 30 percent remain as old-growth on Vancouver Island and the South Coast, and only about six percent of the original old-growth has been set aside in protected areas.

North of Vancouver Island, the Great Bear Rainforest Agreements are expected to protect the ecological integrity of one of the largest mostly intact temperate rainforest regions of the world. In Clayoquot Sound, northwest of the Walbran, the Ahousaht First Nation announced in October an end to industrial logging in their territory, which spans most of the intact rainforest valleys in this region.

But we must not allow these important refuge areas for species that depend on ancient rainforests to become isolated from other old-growth areas. With its outstanding intactness, the Walbran represents the only remaining opportunity in the southern half of the island to save a more contiguous area of productive old-growth rainforest, create connectivity and allow species like the marbled murrelet to find quality habitat between Clayoquot Sound and the Olympic Peninsula. 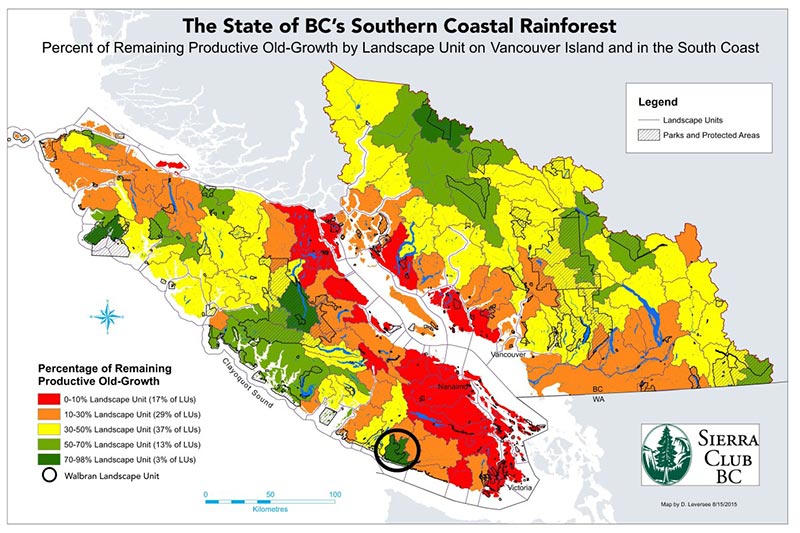 A larger protected area would give species that depend on this rainforest at least a fighting chance to survive, considering the level of degradation and fragmentation of rainforest on Vancouver Island. And only larger areas are resilient enough to withstand increasing climate change impacts like stronger droughts, stronger storms and other extreme weather events.

A recent Sierra Club B.C. report revealed that, over the past decade, B.C.’s forests as a whole have shifted to being net emitters of carbon. This contrasts starkly to their historic role capturing huge amounts of carbon from the atmosphere. While the mountain pine beetle and more wildfires have tipped the balance, our analysis shows that destructive logging practices have been, and remain, the biggest factor contributing to B.C.’s forest carbon emissions.

Lastly, B.C.’s coastal temperate old-growth forests are a global treasure and spectacularly beautiful. Parks and protected areas offer immeasurable recreational joy for visitors and tourists from near and far and support our billion-dollar tourism industry.

Many are shocked to see the sea of clearcuts they must traverse to access the remaining larger, less developed rainforest wilderness areas on Vancouver Island. The Walbran with its unique intact ecological rainforest values is one of the fantastic areas people on Vancouver Island care about and want to see fully protected.

Sierra Club and Wilderness Committee activists explored the area slated for logging in September and found monumental cedars, massive Sitka spruce, hemlock, amabalis fir, and Douglas fir trees. They named the area Black Diamond Grove for its steep slope. The crown jewel of the Black Diamond Grove is the Leaning Tower Cedar, a cedar approximately three metres wide at its base and probably as old as 1,000 years. 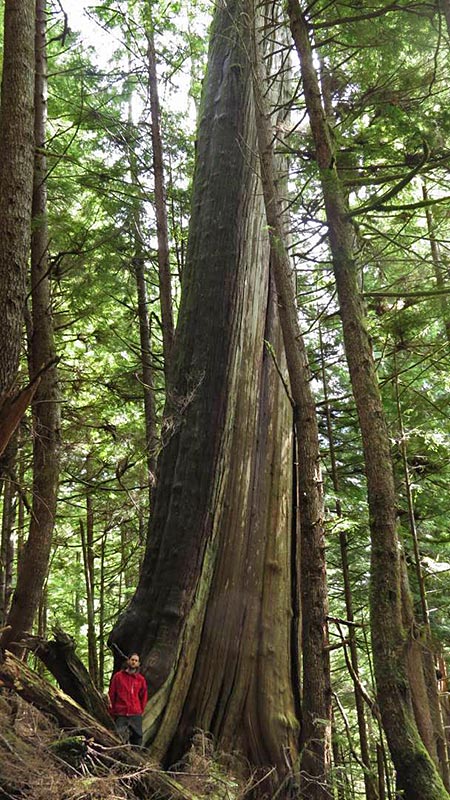 With so little left, how can our society allow logging the last of the endangered old-growth on the island, instead of protecting it for our children, for example my friend Leonie (11 years). She wrote a letter to the Times Colonist and asked the B.C. government to protect the endangered rainforest in the Walbran. I am standing with Leonie: we should protect all of the Walbran.

Sierra Club B.C. is calling for a provincial government action plan to protect and restore B.C.’s forests in light of climate change impacts. Protection of rare and endangered old-growth rainforest ecosystems on Vancouver Island and the south coast is particularly urgent, because once cut, old-growth as we know it will not grow back. B.C.’s forest industry must shift to harvesting sustainable levels of second-growth forest and value-added manufacturing. The transition will not be easy, but in a 10-percent world, denial is no viable option. The logging permit for the Walbran should be our wake-up call.

By Jens Wieting
Jens Wieting is the forest and climate campaigner for Sierra Club B.C. He will speak about conservation and connectivity from the Great Bear Rainforest to Vancouver Island on November 17 at the University of Victoria. Reproduced with the kind permission of Jens Wieting – Source Article on The Georgia Strait