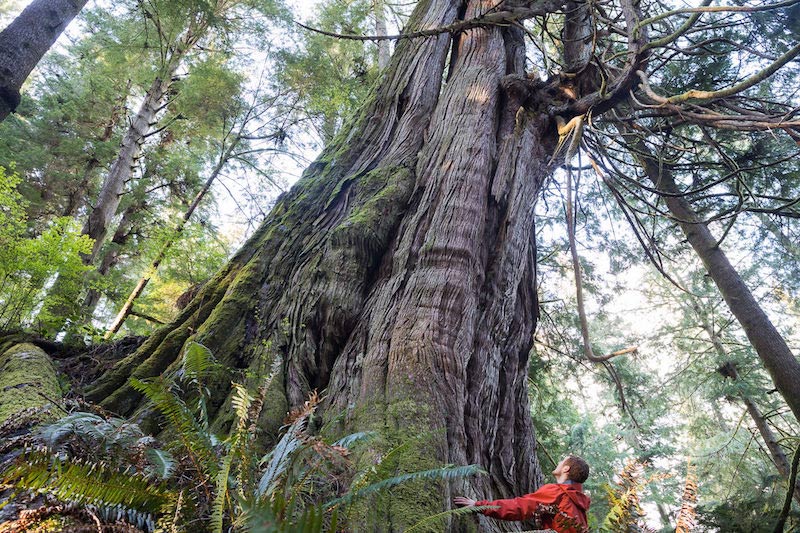 The Ancient Forest Alliance has located an impressive grove of unprotected, monumental old-growth trees growing only a 90-minute drive west of Victoria, between Jordan River and Port Renfrew on southern Vancouver Island.

Spanning a 3-kilometer stretch alongside a portion of the 48-kilometre Juan de Fuca Marine Trail Provincial Park, it lies mainly on Crown lands adjacent to the provincial park and its popular coastal hiking trail not far from Highway 14 in the traditional unceded territory of the Pacheedaht band. The Ancient Forest Alliance’s TJ Watt had explored and identified the area as an old-growth forest of high conservation significance in recent years, but came across a particularly accessible grove of giant trees while bushwhacking a few weeks ago.

“Lowland old-growth groves on southern Vancouver Island with the classic giants like this are about as rare as finding a Sasquatch these days – over 95% of the forests like this have been logged on the South Island. This is one of the most magnificent unprotected groves in the world, and it’s even easier than the Avatar Grove to get to. It will help to bolster the public’s interest to see the BC government enact legislation to protect the remaining old-growth forests on Vancouver Island”, stated Ken Wu, Ancient Forest Alliance executive director. “For now we’ve nicknamed this tract of old-growth forest as the ‘Jurassic Grove’, which could become ‘Jurassic Park’ one day if it is protected. Of course there may be more traditional names for the area, which we’ll be happy to use”.

“This area is like another Avatar Grove – it’s easy to get to, it includes some parts with gentle terrain, and is filled with amazing trees – but it’s even closer to Victoria! When we are able to disclose the exact location when it’s appropriate for wider public access, the Jurassic Grove will undoubtedly become a major source of inspiration and environmental awareness for thousands of people”, stated TJ Watt, Ancient Forest Alliance campaigner and photographer. “It’s hard to fathom that at one time the highway between Victoria to Port Renfrew could’ve been lined with ancient forests like this. Now it remains in just a few patches, like the Jurassic Grove, underscoring the need to protect what’s left of our old-growth forests.”

The Ancient Forest Alliance has requested meetings with the Ministry of Forests, BC Parks, and Pacheedaht council to discuss conservation and access issues regarding the area. Until then, the organization is not yet encouraging the public to try visiting the grove, most of which has no trails, has an extremely dense understory, and which is punctuated with very steep ravines.

While most of Jurassic Grove’s 130 hectares of old-growth is protected within a Marbled Murelet Wildlife Habitat Area that is off-limits to logging, about 40 hectares is on unprotected Crown lands without any type of regulatory or legislated protection.

There are no approved or proposed logging plans on these lands, according to Ministry of Forests data on the BC government’s iMAPBC website.

As it abuts against a popular provincial park for hiking, it would be a natural addition to the park and as a buffer to the Juan de Fuca trail – and ultimately as a star attraction for visitors around the world.

“We should make it clear that we did not ‘discover’ this forest, in the sense of being the first humans to see it, of course. People have lived in the area for thousands of years, and hikers mushroom pickers, hunters, surfers, biologists, and loggers (who logged to the edge of this forest several decades ago … and of course who would’ve surveyed it as well) have all traversed the area. What we’ve done is located and identified the old-growth grove here for its high conservation and recreation value”, stated TJ Watt, AFA campaigner and photographer. “However, the days of identifying such unprotected monumental groves are coming to an end, because in a few short years these forests will either be in protected areas, or gone. This area needs legislated protection”.

Jurassic Grove’s easy-to-access location makes it a potential first rate ancient forest attraction that can help to raise the awareness of all endangered old-growth forests, and bolster the regional eco-tourism industry. Port Renfrew, historically a logging town that now promotes eco-tourism and has been dubbed the “Tall Trees Capital of Canada” in recent years due to its proximity to the Avatar Grove, Central Walbran Valley, Big Lonely Doug (Canada’s second largest Douglas-fir), Eden Grove, Red Creek Fir (the world’s largest Douglas-fir), Harris Creek Spruce (an enormous Sitka spruce), and San Juan Spruce (previously Canada’s largest spruce until the top broke off last year), now has the Jurassic Grove as another first rate addition to its roster of big tree attractions. Thousands of tourists from around the world now come to visit the old-growth trees around Port Renfrew, hugely bolstering the regional economy of southern Vancouver Island.

The Ancient Forest Alliance is encouraging people who visit the area to stay in local accommodations, buy food and groceries in local stores, and camp in the Pacheedaht campground to help boost the local economy with eco-tourism dollars.

To the south, the BC government has just bought up the 7 parcels of second-growth private forest lands, totalling 180 hectares, from a developer and intends to increase the width of the provincial park to buffer the trail along its first several kilometres, while lands outside the buffer will go to the Pacheedaht First Nation band in Port Renfrew as part of the treaty settlement process. To the north, the Crown land old-growth forests of the Jurassic Grove could also be a natural addition to buffer the trail, whether as an extension of the existing park or as a tribal park/conservancy.

More Information on Old-Growth Forests
Over the past year, the voices for old-growth protection have been quickly expanding, including numerous Chambers of Commerce, mayors and city councils, forestry unions, and conservation groups across BC who have have been calling on the provincial government to expand protection for BC’s remaining old-growth forests.

BC’s premier business lobby, the BC Chamber of Commerce, representing 36,000 businesses, passed a resolution last May calling on the province to expand protection for BC’s old-growth forests to support the economy, after a series of similar resolutions passed by the Port Renfrew, Sooke, and Westshore Chambers of Commerce. See: www.ancientforestalliance.org/news-item.php?ID=1010

Both the Union of BC Municipalities (UBCM), representing the mayors, city and town councils, and regional districts across BC, and Association of Vancouver Island and Coastal Communities (AVICC), representing Vancouver Island local governments, passed a resolution last year calling on the province to protect the Vancouver Island’s remaining old-growth forests by amending the 1994 land use plan. See: http://www.ancientforestalliance.org/news-item.php?ID=1057

The Private and Public Workers of Canada (PPWC), formerly the Pulp, Paper, and Woodworkers of Canada, representing thousands of sawmill and pulp mill workers across BC, recently passed a resolution calling for an end to old-growth logging on Vancouver Island. See: www.ancientforestalliance.org/news-item.php?ID=1100

The Ahousaht First Nation band north of Tofino in Clayoquot Sound recently announced that 82% of their territory will be off-limits to commercial logging. They now need provincial legislation and funding to help make their vision a reality. See: www.desmog.ca/2017/01/27/first-nation-just-banned-industrial-logging-and-mining-vancouver-island-territory

The Ancient Forest Alliance calling on the BC government to implement a comprehensive science-based plan to protect all of BC’s remaining endangered old-growth forests, and to also ensure a sustainable, value-added second-growth forest industry.

See maps and stats on the remaining old-growth forests on BC’s southern coast at: www.ancientforestalliance.org/old-growth-maps.php

By the Ancient Forest Alliance
Website: www.ancientforestalliance.org
Source Article, May 6, 2017.