Wild Packs of Feral Beasts on the Loose! 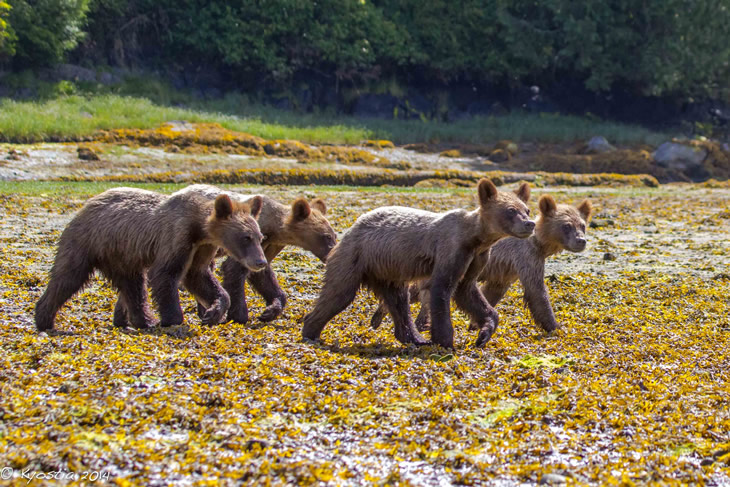 In a plea for public help, ursal authorities have released photos of what appears to be a gang of wild bears (referred to as a ‘sleuth’) observed prowling outside local watery holes as of late. Travelling in tight formation, these marauding animals appear to be under the command of an exceptionally large matriarch (under the pseudonym ‘Quadramom’) skilled in the ancient art of salmon annihilation.

As earlier reported, there’s been something distinctly fishy developing in the uninhabited reaches of Knight Inlet. By all accounts, this summer season is unfolding as a virtual feeding frenzy for all coastal critters with a taste for salmon (humans included!). Even the old-timers are mumbling something about ‘ain’t never havin’ seen nuttin’ like it…’. At times on the doorstep of TideRip HQ it looks as though it’s raining, what with an endless horizon of salmon breaching on the placid waters of Johnstone Strait.

Our little piece of Bear Heaven is no exception. Upon last count (July 22nd), there were an estimated 16,400 fish in the river at a time when there should be none, nadda, zero, zilch. Our experience suggests that these eager breeders will likely succumb to suffocation in the warm, oxygen-deficient waters of a coastal river in August. But never fear! Before your heart starts to sing melancholy haikus, the living dead will be followed by waves of more sensible, less hormonal, very much alive fish which will successfully go on to perpetuate the species from now to eternity (fingers crossed).

What does this all mean? A fishy feeding feast made easy for all!

Grizzly bears and black bears, deer and wolves, eagles and an amazing array of seabirds, there’s always something to see on a Tide Rip Grizzly Tour!

We depart at 0700am daily from historic Telegraph Cove bound for the spectacular Knight Inlet by covered water taxi, complete with onboard washroom. Cost is $299 per person for this all day excursion and includes a light breakfast, healthy lunch and knowledgeable Guides.

About Tide Rip Grizzly Adventures
Enjoy the majesty of the coastal mountains as we explore spectacular Knight Inlet. Experience the thrill of a lifetime watching grizzly bears catch salmon. We view the grizzly bears from the safety and comfort of our big flat-bottom viewing boats. Their shallow draught gets us in close to the action. Tide Rip Grizzly Tours offers the only day trips by water taxi from Telegraph Cove to see the grizzlies in the land of the Da’Naxda’xw First Nations. Bring your camera, as black bears, bald eagles, and porpoises are everywhere!